This week I attended a Thai cooking class at Las Cosas with Chef Johnny Vee. Surprisingly my favorite dish was the Thai fish cakes. My second favorite was the salmon toast. I also liked the dessert. I had black rice before in a restaurant that served my entree on top of a bed of it, but in that instance it was meant to be savory. 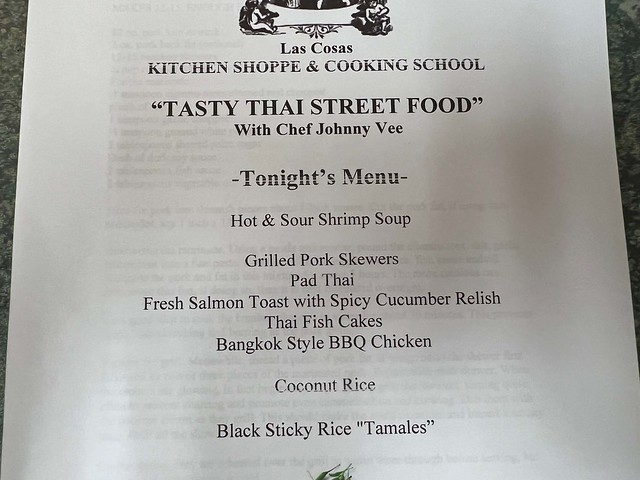 Per usual, the menu items were divided up among the class members. I worked on Grilled Pork Skewers with another classmate. We also worked on the Black Sticky Rice “Tamales” since we finished early, but it was already started for us by Chef Johnny Vee.

We used a pork ribeye cut and I cut them into cubes. 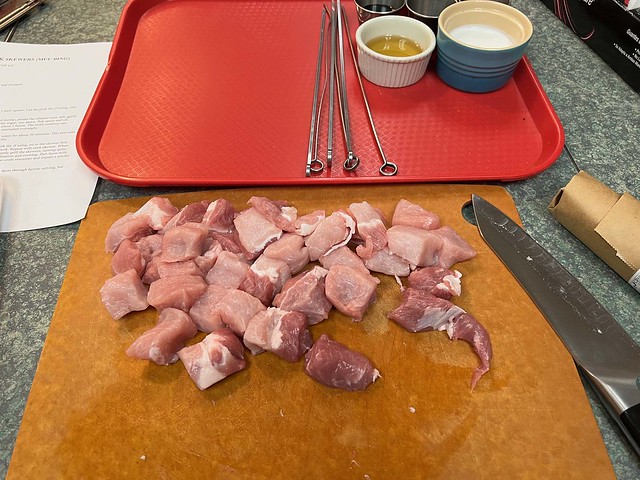 We also used some bacon and I cut them into little slices. So this is a pork-pork skewer. 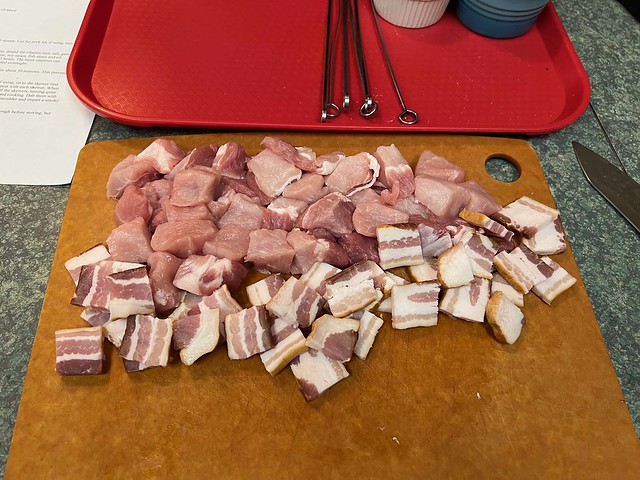 We also needed to prepare a marinade. Some garlic was minced and cilantro was chopped. Then both were mashed into a paste in the mortar and pestle. 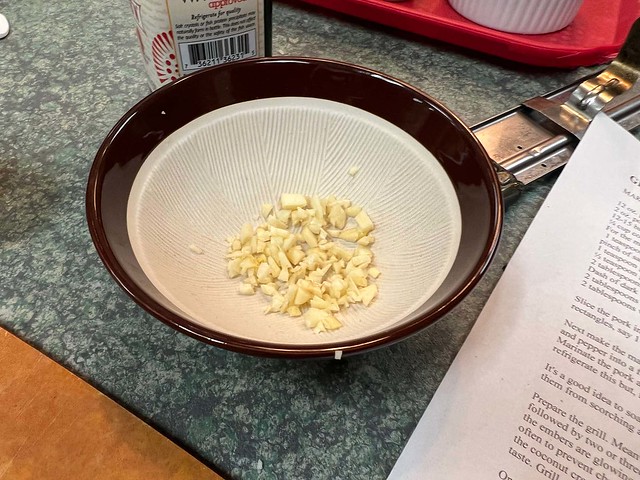 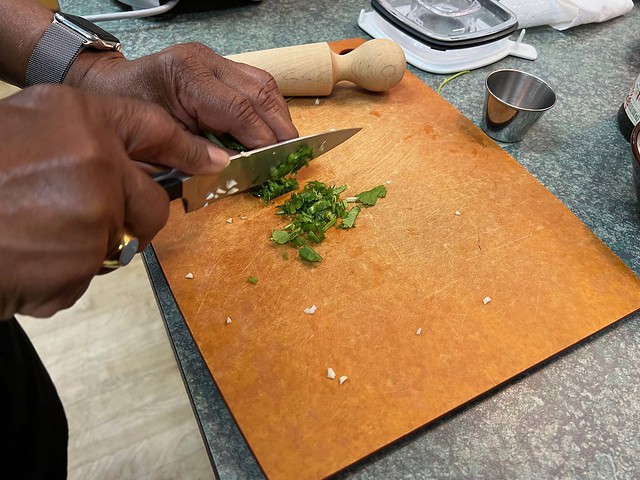 The rest of the ingredients were measured out on a tray for us – white pepper, coconut sugar, dark soy sauce, fish sauce, and vegetable oil. 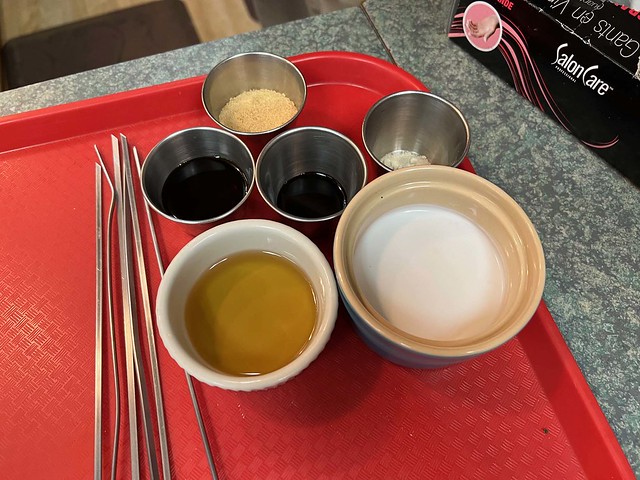 We mixed the mortar and pestle contents along with the tray ingredients to make the marinade and poured it over the cut up pork pieces and bacon. 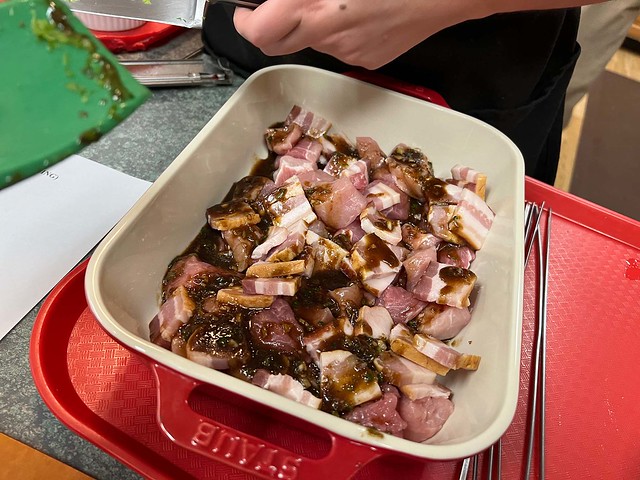 We then used a fork to coat the pork pieces and bacon slices with the marinade. The recipe called for marinating for three hours, but we only let it sit for 30-45 minutes. 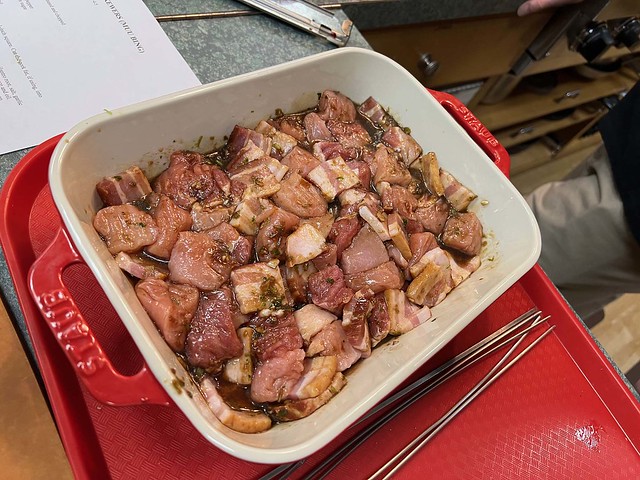 We prepared the skewers by alternating between pork pieces and bacon slices. 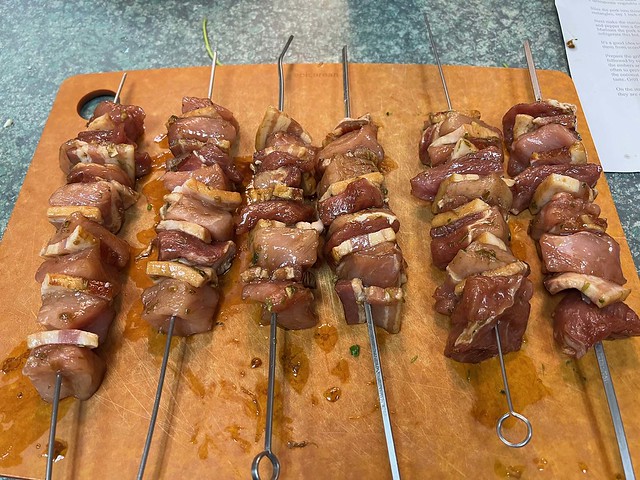 Then we placed them on the stovetop grill pan. 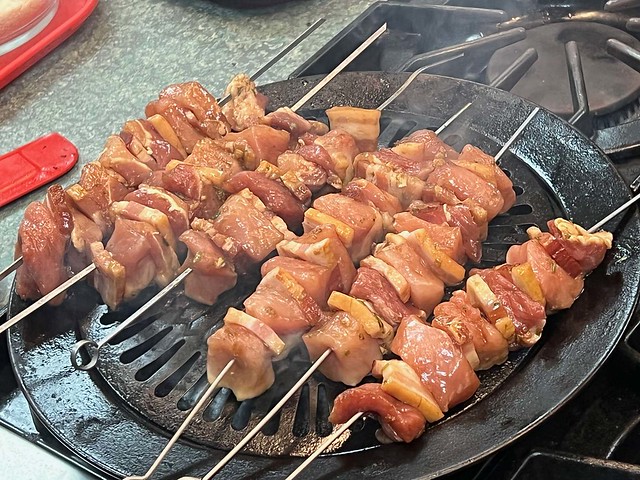 We brushed them with coconut cream as they were cooking. 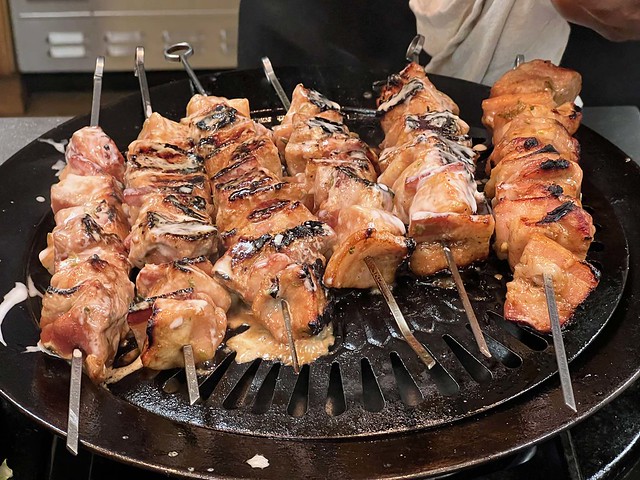 After charring them on both sides, the stovetop grill pan went into the oven to finish. 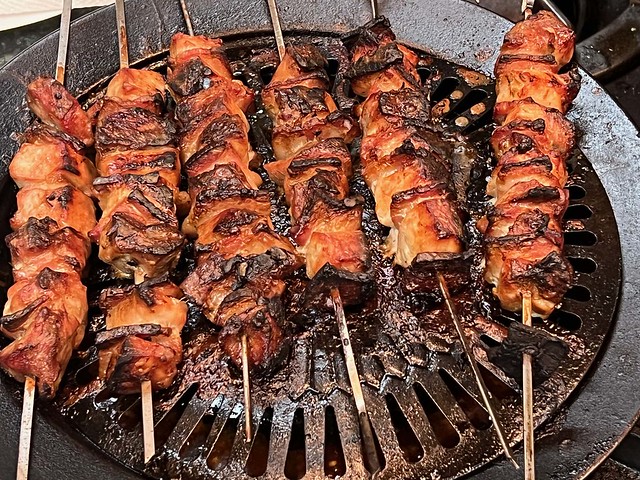 Because there were only six skewers, but 11 people in class, we removed the meat from the skewers and put them in a serving bowl. 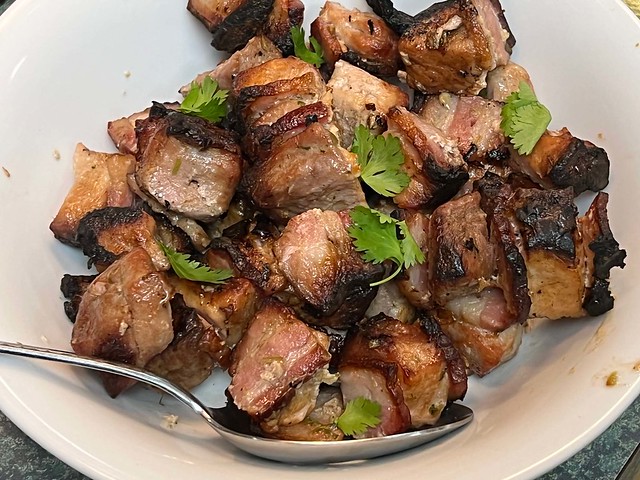 The black rice was already cooking when the class started. We finished the dish. Our tray of ingredients included coconut milk, sugar, sesame seeds, coconut cream, and corn husks. 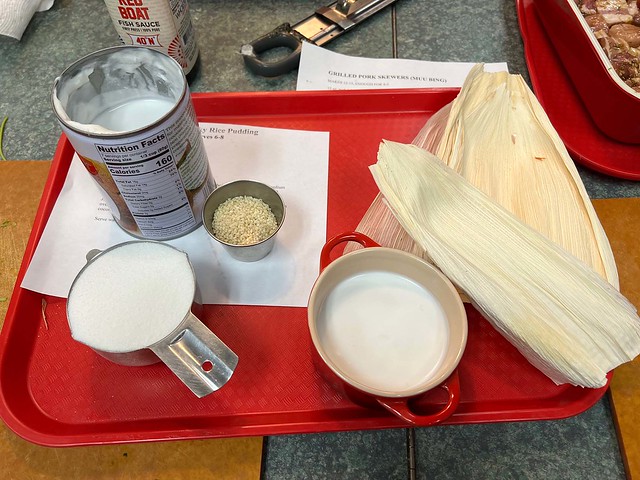 We cooked the coconut milk and sugar in a pot to dissolve the sugar. Then we added that mixture to the black rice that was already on the stove. 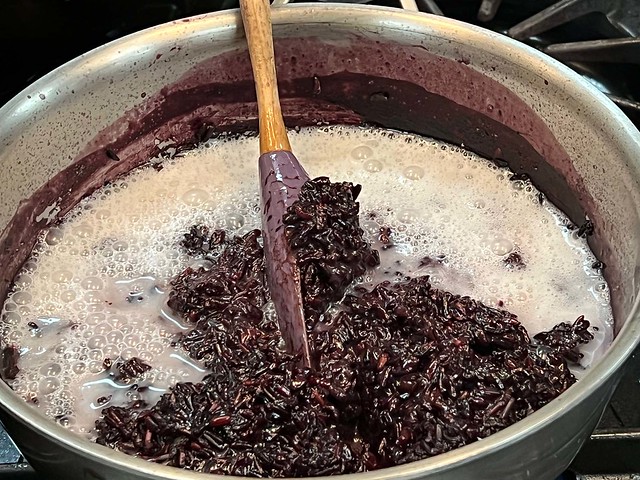 We incorporated the milky mixture into the rice and continued to cook. After it was done, we placed a scoop of black rice on a corn husk, spooned on some coconut cream, and sprinkled on sesame seeds. 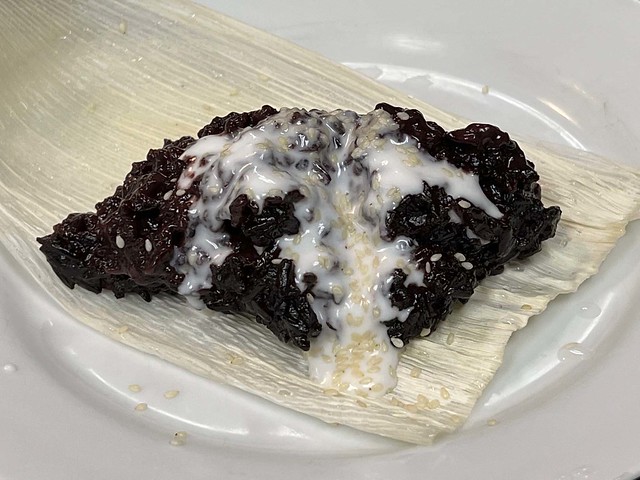 The Other Menu Items 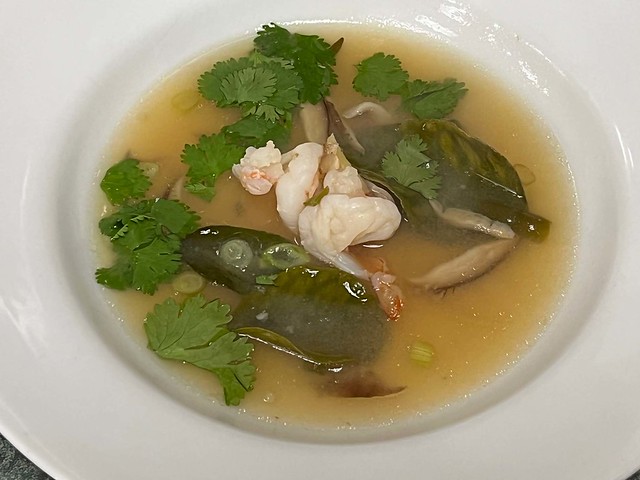 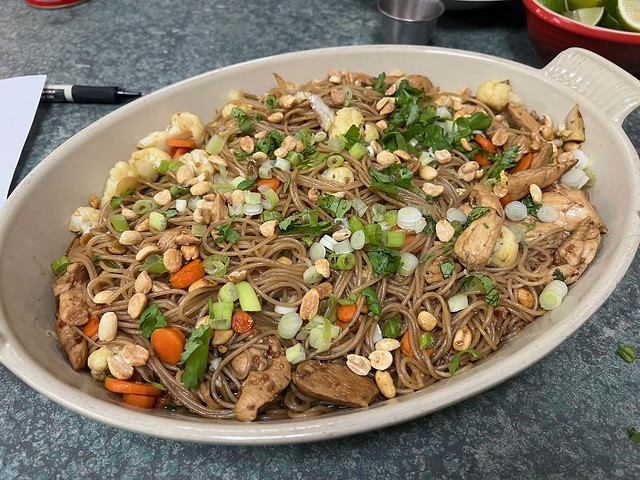 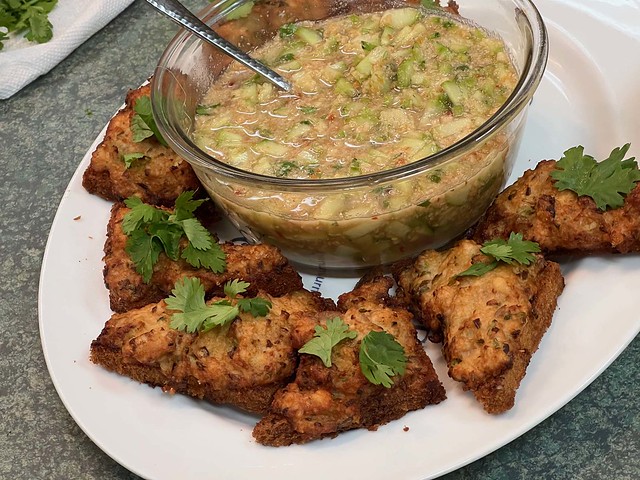 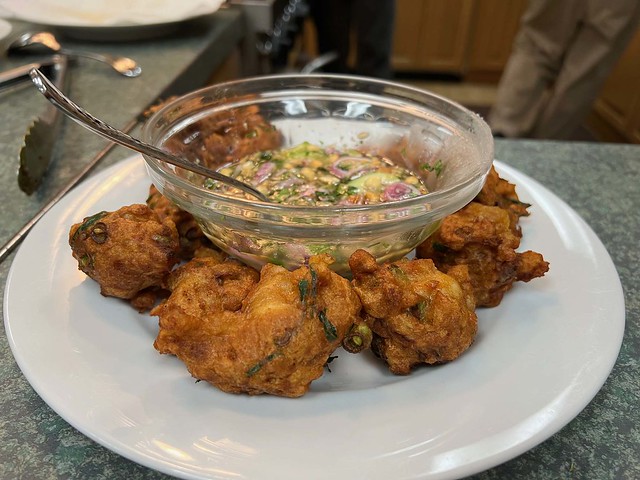 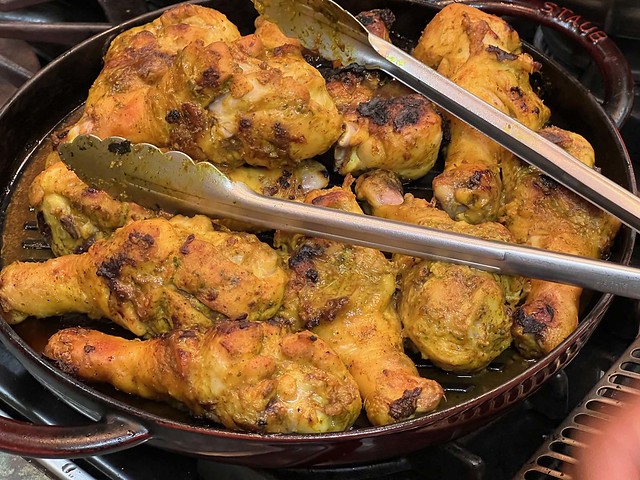 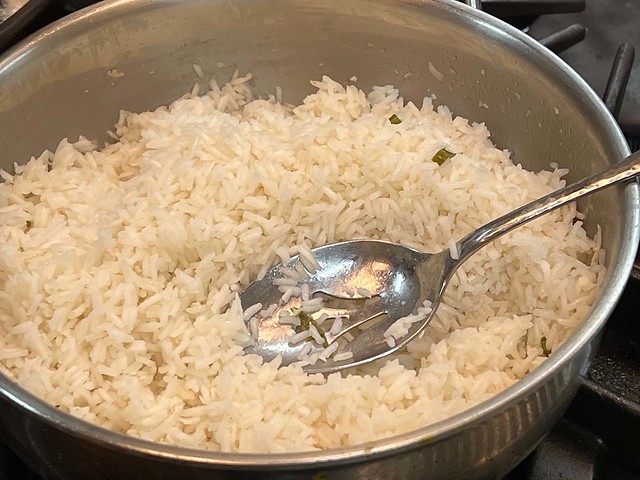