I attended the Sean Sinclair from Luminaria class on Saturday morning at Las Cosas. This was a class with a guest chef. When we have a guest chef, Chef Johnny Vee who is the regular instructor is still present, but the recipes are from the guest chef – in this case Chef Sean Sinclair. The class did go over time, but I don’t think bothered most of us. I had no idea we were running over until Chef Johnny Vee mentioned it.

Per usual the menu items are split up among class members. There were a lot of people in this class so each menu item had four people working on it. The pecan cobbler was changed to pecan pie tart.  Chef Sean explained that the pecan cobbler recipe that he was thinking of is one served at his current restaurant and it a bit involved. Apparently they make their own phyllo dough and it is multi-day thing.

With three other classmates (all who had made pies before), I got to work on the pecan pie tart. I was glad it was pecan pie rather than a fruit pie. I do not like fruit pies.

The pie crust had all-purpose flour, salt, shortening (or I think it was really lard), salted butter, egg, white vinegar and cold water.

The photo below is of the pie crust after all prep steps had been taken and it had chilled in the refrigerator for a bit. 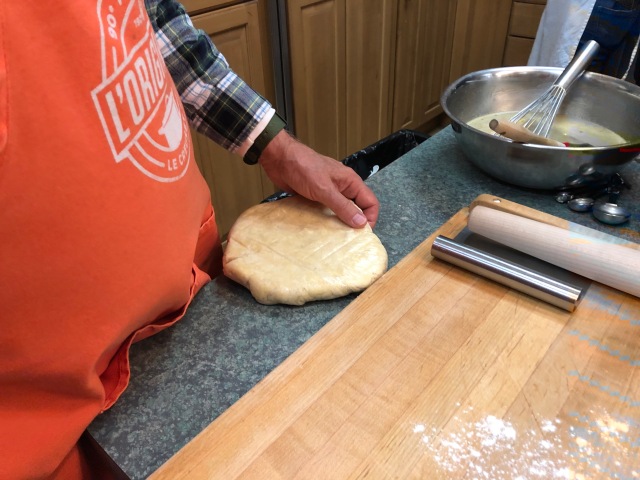 The pie filling was prepared by two others in our group. It has sugar, brown sugar, salt, dark corn syrup, melted salted butter, vanilla, and eggs.

Back to the pie crust. The dough was place on a floured surface and rolled out. Then we used the tart pan to create the rough circle of dough that would be pressed into the pan.

The tart pan was put back together, placed right-side up, and the dough was carefully laid over the pan. Then it was pressed carefully into the pan. Next the excess dough was cut away.

Next the pecans were placed in a flat layer on the piece crust and the syrup mixture was poured on top.

The pie tart right out of the oven.

The pie tart after removing the tart pan. 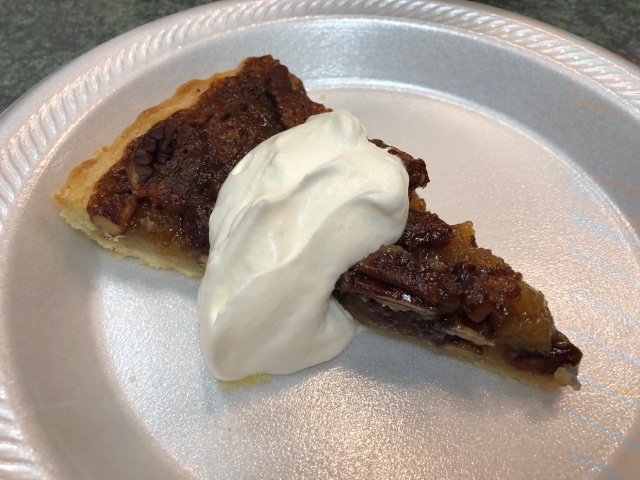 The Other Menu Items

Lamb – Lamb T-bones, salt and pepper. It was medium rare.