I went to the sauce master class at Las Cosas yesterday morning. We covered 8 sauces, but for the practical part we split them up. I got crème anglaise. Chef Johnny Vee said it didn’t make sense to make sauces by themselves and then just taste sauces. That wouldn’t have worked with the chicken Marsala anyway. So we made things for the sauces to go with.

Below is the plum crumble that me and another student made to go with the crème anglaise. I put a layer of sauce on the plate before spooning the plum crumble on top and then put a little sauce on top of the crumble. The ice cream was probably overkill, but why turn down ice cream? It was all very tasty together and that is coming from someone that is not a fan of cooked fruit. 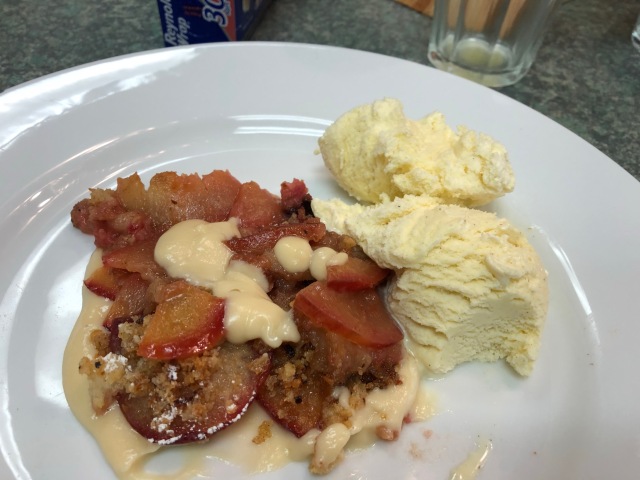 The plum crumble after coming out of the oven.

So this is the full list of sauces covered in the class:

The hollandaise was made the traditional way so we would know how to do it. But it was the most difficult technique-wise and the chef advised us to look up James Beard’s blender hollandaise method for the future.